NASA’s Great Observatories program is a series of space telescopes that study the cosmos across the electromagnetic spectrum. One central goal of the program was to overlap the operations phases of the missions to enable astronomers to make contemporaneous observations of objects at different spectral wavelengths. See some of the amazing images from these and other great telescopes. 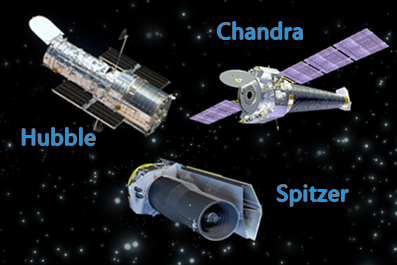 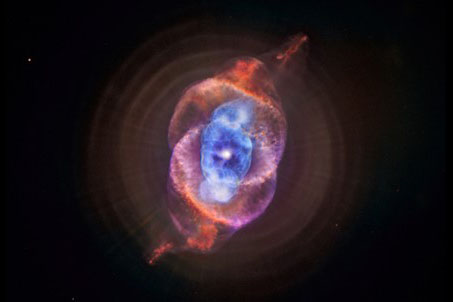 See a collection spectacular images from the Great Observatories. 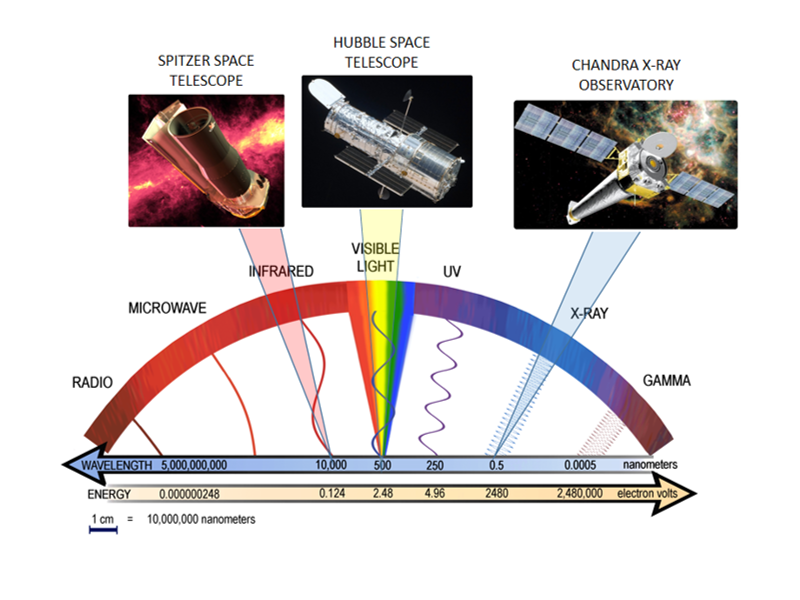 Until relatively recently in the history of astronomy all telescopes observed visible light, essentially the same form of light that our eyes see. However, visible light is only a small part of the entire electromagnetic spectrum. Seeing astronomical sources in different wavelengths tells us different information about the objects.

NASA launched a series of telescopes called “NASA’s Great Observatories” program to concurrently observe objects in various wavelengths. The Spitzer Space Telescope observes infrared or heat radiation. Because the Earth’s atmosphere absorbs this energy, this telescope was launched into space orbit. The Hubble Space Telescope primarily observes in visual wavelengths. The Chandra X-ray Observatory, another Earth-orbiting telescope, observes X-ray radiation, a high energy wavelength that is absorbed by our atmosphere. 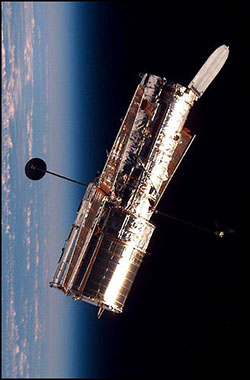 The famous Hubble Space Telescope (HST), named after the astronomer Edwin Hubble, continues to collect images of the sky in the near ultraviolet, visible, and near infrared spectra. Launched into space in 1990, this telescope has undergone several Space Shuttle mission repairs and upgrades. HST’s successor, the James Webb Space Telescope (JWST), is scheduled to be launched in 2018.

The Chandra X-ray Observatory detects X-ray emissions from very hot regions of the Universe such as exploded stars, clusters of galaxies, and matter around black holes. Chandra is a space-based telescope, orbiting above Earth’s atmosphere to detect X-rays which would otherwise be absorbed by Earth's atmosphere. 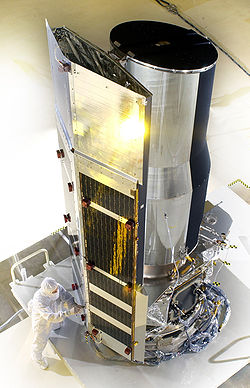 The Spitzer Space Telescope was launched in 2003 in an earth-trailing orbit. This telescope captures the infrared spectrum (primarily heat radiation). An onboard tank of liquid helium, or cryogen, cools the 85 cm telescope to only a few degrees above absolute zero (-459°F, -273°C).